skip to main | skip to sidebar

So I obviously have not been updating this. I mostly just use Twitter, but really I have had social media overload. Facebook, Livejournal, Twitter, Blogger, my Mac/.Me site - I get vapor lock and don't update much of anything when that happens.

Things have been going well, my mom is doing fine - still tough to get used to not having your partner of over 40 years around. I'll be visiting her in January though.

More updates soon, just have to start saving links to the odd sites I come across and post them here - my online bookmarks I guess!
2 rumblings

Been about a month since my last post. We did dad's memorial, it went well. The Marines were there to perform the flag presentation to my mom and the American Legion did a 21-gun salute and another Marine performed Taps at that time as well. I recorded it and may put it up at some point, but not right now.

Here is the memorial powerpoint my brother did for pops: 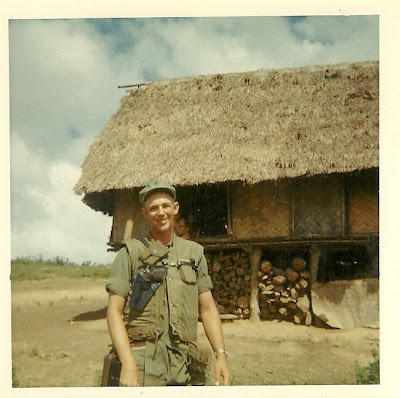 On patrol near Khe Sanh, likely a Bru Montagnard village. He customized a .45 holster to be a lefty since they didn't have lefty versions. 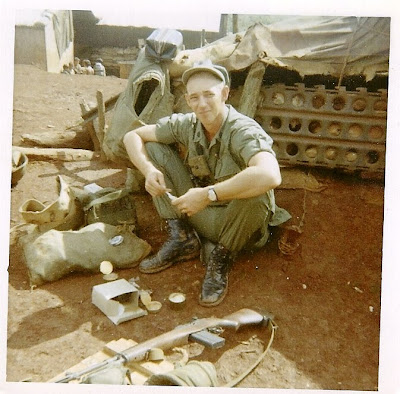 Thank you dad, you helped make me who I am

Been a tough odd week. On Thursday September 17th my dad passed away from a sudden heart attack. I'm down in Florida now with my mother, older brother and his family. We've been going through dad's things, lots of treasures and quite a few surprises, even for mom.

My brother has been scanning pictures in for dad's memorial. We've gone through his workshop and got rid of all the hazmat stuff that he wouldn't get rid of. Also found his 'stash' of smokes that he wasn't supposed to have :D

Dad was a good guy, saw a lot of interesting things in his 67 years and dodged death and calamity many times. He was a USMC veteran, served 1959-1969 and in Vietnam in '67 and '68. He served at Cam Lo and Khe Sanh combat base. He was at Khe Sanh during the siege and battle in 1968, medvaced out shortly after the offensive started.

He made it through a major heart attack at 38 and kept on trucking. Stroke in 2001 and several other surgeries over the years but time finally caught up with him. Above all he showed me to always stick to your guns and to your word. Integrity was important with pops.

I'll have to write more later either here or in private, but he was a strong influence in my life and showed me a lot. I'll miss you pop, Semper Fi.
4 rumblings 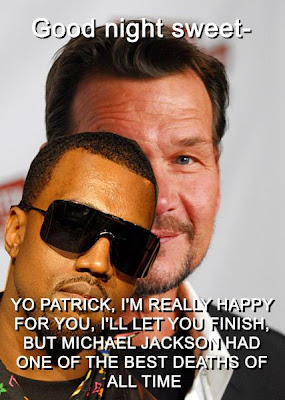 In case you missed the MTV Video Awards, Kanye West pulled a tantrum out his butt again.
This site has some fun and welcomes one of the fastest growing memes to hit the internet since Rick Rolling. Just a clicky the picture.
0 rumblings

Linky
Taggified: fail, HAHA Submitted by Chris Z. at 6:10 AM

Had two three day weekends in a row. Labor day weekend and this weekend I took Monday off.

I had a lifelong friend in the Portland area for a Habitat for Humanity workshop and she was able to visit with us briefly. She had to fly back on Sunday for an early Monday doctor appointment so the visit was basically Saturday evening and Sunday morning, but it was fun. Her family used to live down the street from us and they moved when I was about 4 but they remained friends ever since. I visited with them this past May when I was in California for a work trip, I hadn't seen them since at least 1992 so it was great then. And great to visit some more this weekend.

She does want to come back up for another visit to see the sights of Portland. We stopped at the International Rose Test Garden on the way to the airport. It is maintained by the City of Portland parks and rec department and is really a neat bunch of gardens. Great views into town as well since it's up in the hills.

Monday was errand day, trading out a borked cable box and selling some books back to Powells books. Then a dentist appointment to finally finish up my never-ending root canal. This last appointment was to fix the hole in my crown so it was short and Novocaine-less.
0 rumblings

Linky
Taggified: blahblah, rambling Submitted by Chris Z. at 7:39 AM

Who's that in the background?

Spent this past Sunday/Monday doing some work as a background extra for the TV show Leverage. I got to be a Boston dockworker despite being in Portland. Through TV magic Portland locales are transformed into Boston. It was a long tiring day but a lot of fun.

Sunday I was up at 3:30am to make it to the set by 5am. By 6am we were getting our wardrobe checked out and props. I had some old blue coveralls with me and my steel toe boots so that was my outfit. They provided an orange safety vest and hard hat, voila, a dockworker! A lot of what we were doing was being the miscellaneous people you see in the background of a shot looking like we're busy doing shipyard/dock stuff. Some guys were carrying pipes around, others driving carts or carrying lunch boxes. Some were on bikes. I got to stare at a power meter a few times.

Other extras got to be FBI agents, Boston PD, Port Authority PD, Thugs, Gun Buyers. Neat seeing a shot come together. Helicopter, police and FBI cars racing around the docks. We did a lot of the same walkthroughs for different angles. The main actors probably had it worse though as they had to keep doing the lines for all the different angles and shots while being on a ship in 80+ weather with that heat just reflecting off the deck. And when we wrapped up at 8:30pm they kept going until almost 11pm.

Yesterday there were a few shots and then mostly just waiting in the holding area in case they needed some more background. Later call time so I didn't have to be there as early, plus they fed us a really good lunch before sending us home. The actors were all really cool people, the directors and assistants and other crew were all awesome. I don't think I could do a job like that full time like they do, it's pretty demanding, but it was neat to get behind the scenes of a TV production to see how it is done. I've been an extra on one film that hasn't been released yet, but I didn't get any camera time, it was also neat but the routine was different for it.

Extra work isn't glamorous but it is fun, you meet some neat people and you just might see yourself on TV for a brief moment.
3 rumblings

Linky
Taggified: blahblah, extra Submitted by Chris Z. at 6:53 AM

Nothing like having a pair of LDS whiteshirts show up at your door to make the blood boil. If the policy of the apartment complex is NO SOLICITING, guess what? Your push of religion is soliciting.

Answered the door and a couple mormons are there and the tall guy (taller than me, that's different, I'm 6'5") says "Can I sing you a song about Jesus?" and I say "No, not interested"

"Because I'm an apostate"

And on it goes until he says "I'm sorry for you"

That. Pushed. My. Button.

Sorry for me? Because you're running around with your Santa Jesus? Your imaginary friend? Give me a break. I don't go door to door pushing Christopher Hitchens or Stephen Hawking or Darwin on people, why can't you leave me be? Oh, some book says "Go forth and spread my gospel" Well guess what? Not everyone wants to be 'Saved' or an LDSer. Some of us lost Jesus years ago and are quite happy in the here and now. Live in the present to make for a better future.

Be good, do good, help others. That's what I try to live by. Pretty straight to the point.

What? A godless heathen with MORALS???

Recovering from an infection brought about by a root canal. I have had two done before on upper teeth and never had a problem. Third time's the charm! Lower root canal was cleared out and the endodontist put some stuff in there to kill off the rest of the roots but the roots had other ideas. Two days later my jaw was swollen up and I was in supreme pain land. Went back and had it prodded and drained (immediate relief) and got a scrip for antibiotics and vicodin.

Took about 3 days for it to really start clearing up and after 5 days I was able to eat food that wasn't in liquid or boiled pasta form. Lost 5 pounds during this time but I don't recommend this method for weight loss. One more day of antibiotics and I'm done with that until next month when I have the follow up/finisher appointment, not sure if he'll put me back on antibiotics as a precaution.

The drag with the antibiotics is having to get my butt up at midnight to take a dose, have to do them every 6 hours. So I am looking forward to Thursday night and hopefully a full night of sleep. Which of course means my neighbors will take that as their cue to throw a mega-bass-rave party.
2 rumblings

Linky
Taggified: blahblah, rambling Submitted by Chris Z. at 8:03 AM 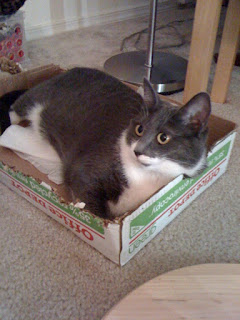 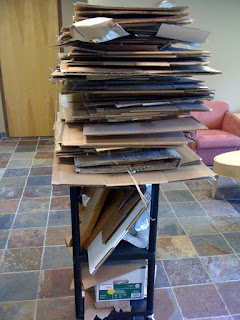 Tired of waiting for someone to dump old boxes into recycling so here I go. Had to avoid ticked off wasps in the bin, their nests got knocked down and they were lookin' for payback!
0 rumblings

Linky
Taggified: work Submitted by Chris Z. at 9:28 AM

Nothing says 'Dignity' like a grown man going by on a Razor scooter.
0 rumblings

Linky
Taggified: fail Submitted by Chris Z. at 7:20 AM

Yesterday I took a drive over to Vancouver, WA for an appointment. As I'm at a stoplight I see a sticker in the back window of a truck. At first glance it's not unusual (to be loved by anyone...oh wait...digress) as it looks like a college type sticker in big letters. Then I notice it just says 'BOXERS'. I am not familiar with a college or sports mascot known as the 'Boxers' so I can only think this guy is a real supporter of unsupportive undergarments. It really made me want to yell out the window at him 'BRIEFS!!!!!!' and shoot the bird at him or something.

So yeah, my head, it's a scary place. But there aren't any clowns there at least.
0 rumblings

Linky
Taggified: blahblah, insidemyhead Submitted by Chris Z. at 6:27 AM


Cynical-C had a post titled Neon Nights, this is what I thought it would be...
0 rumblings

By the geniuses at rathergood.com
0 rumblings

It's a couple years old now but I think it's still funny! I haven't dared to make a sequel, it just won't be the same as 'Stray Cat Strut' 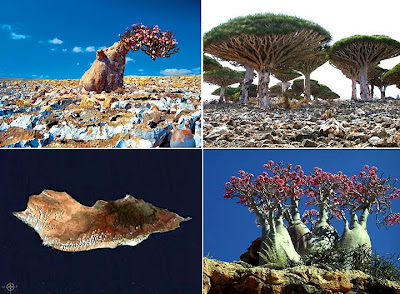 Dark Roasted Blend has been a favorite of mine for years, Ari gets some awesome pics and contributions to his site as well as just plain funky stuff such as the pic above from 'The Most Alien Looking Places on Earth"

Occasionally I'll probably link over to his site when a neat (to me) feature runs.
0 rumblings 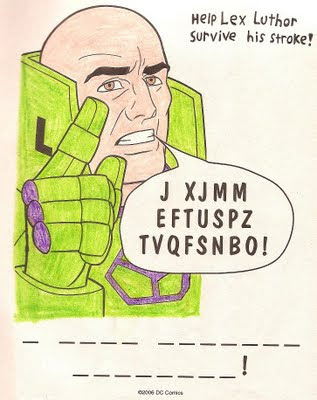 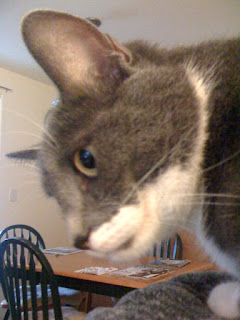 So it seems I can't resist another blogging medium. But at least I NEVER had a MySpace, still have a LiveJournal account but they were always cooler than MySpace, less visual diarrhea.

Not sure what I'll fill this up with, but I'm sure it'll be random until I can settle on some sort of theme. Must check for iPhone blogger apps.....
0 rumblings 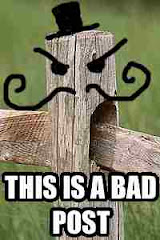 Chris Z.
Inspired by Noah Scalin's Skull-A-Day project I am kicking off an 'A day' project featuring robots.